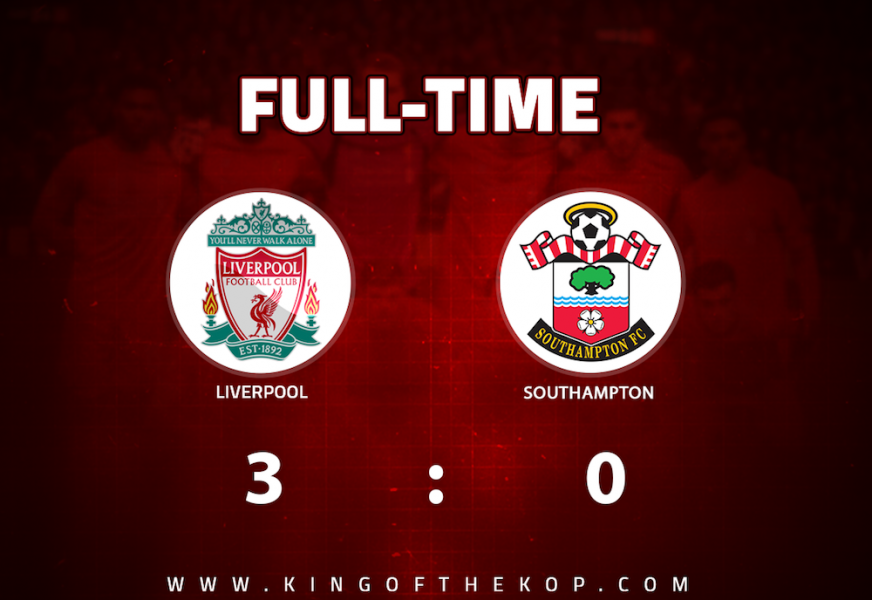 Jurgen Klopp made four changes to his Liverpool team with Dejan Lovren replacing the injured Joel Matip in central defence. Joe Gomez was a surprise omission but perhaps one eye was on the Champions League match against Seville in midweek.

Salah opened the scoring in the 31st minute when he curled into the net from 18 yards, punishing Dusan Tadic for losing possession.

The strike gave the Reds confidence and ten minutes later an exquisite Philippe Coutinho pass picked out a perfectly-timed run as Salah slotted a second past Fraser Forster in the 41st minute. It was Salah’s 14th goal in what is fast becoming a stellar debut season for the Reds.

Philippe Coutinho added a third in the second half when Southampton keeper Foster could only parry a Firmino shot and the Brazilian was on hand to knock it in from 12 yards in front of the Kop.

It was an easy victory for the Reds who didn’t have to move into top gear against a struggling Saints who offered little in front of goal.

Liverpool are now fifth in the table, a point behind Tottenham in fourth.

Liverpool are away on Tuesday when they visit Seville in the Champions League (19:45 GMT) before a massive clash against Chelsea at Anfield on 25 November (17:30 GMT).